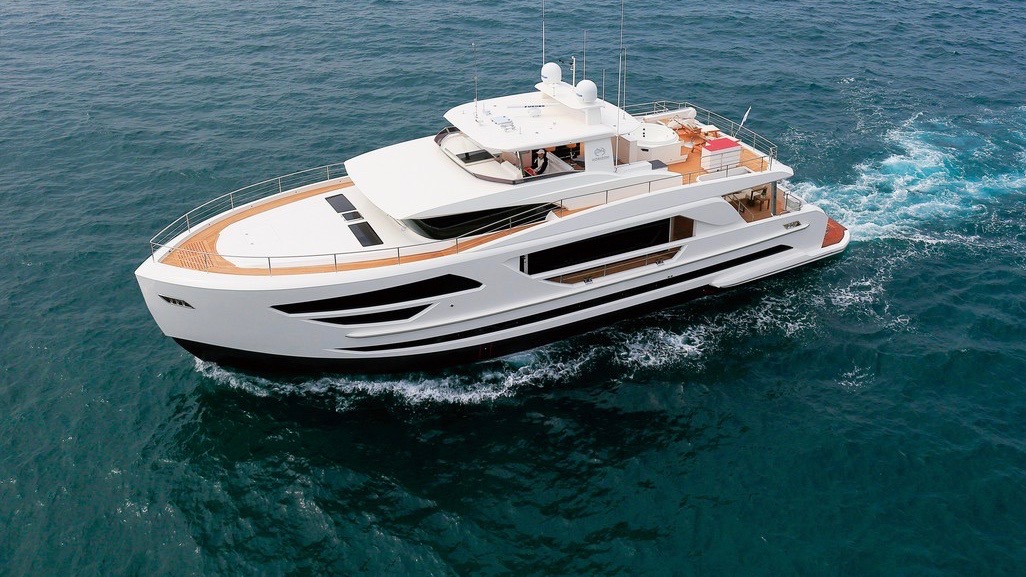 Making waves with the FD series 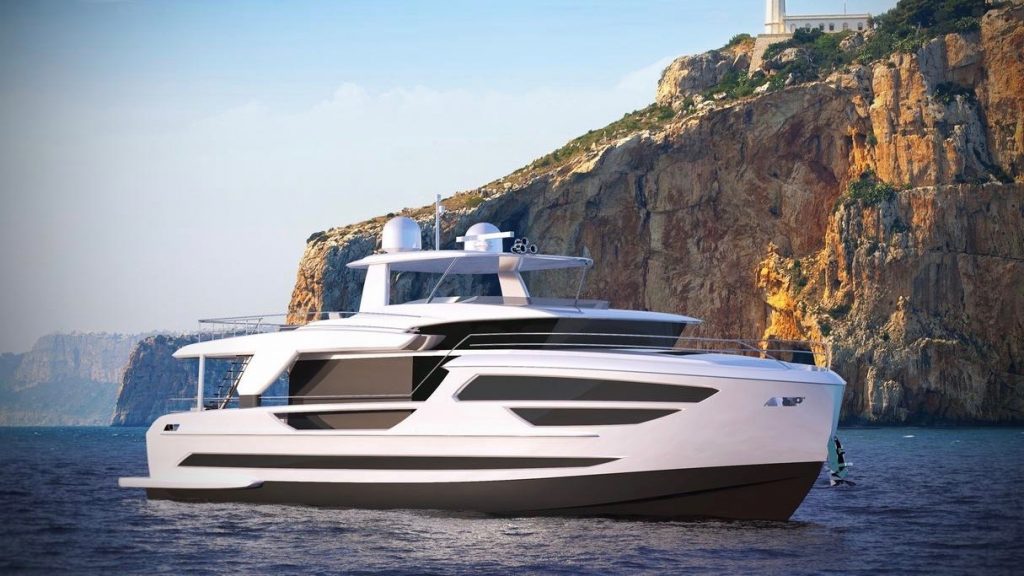 Horizon Yachts is pleased to announce two new models in the revolutionary FD fast displacement series – the FD74 and FD102. These new models follow the acclaimed debut of the FD85 hull one at the Taiwan Int’l Boat Show in March; hull three is scheduled to deliver to the U.S. as an inventory yacht in 2017. The FD74 and FD102 models are currently in their final design and engineering stages.

The FD series is marked by a striking profile that features a plumb bow and plentiful floor-to-ceiling glass windows, and each model has been designed with entertainment, relaxation, and seakeeping in mind. 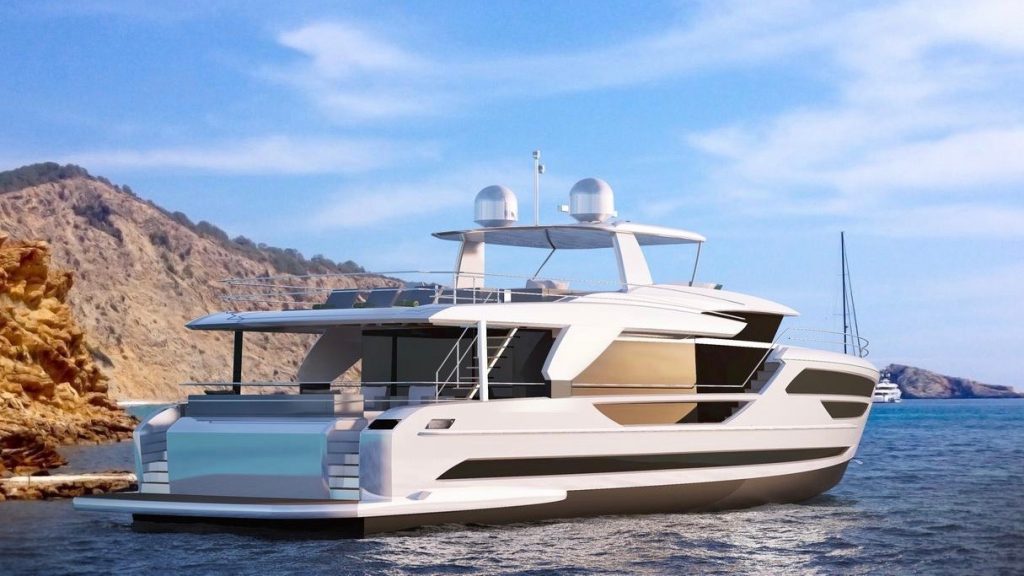 Renowned designer Cor D. Rover collaborated with Horizon’s in-house naval architecture team to develop each model in the advanced Fast Displacement series, which boasts a hull design that not only provides flexible performance but also allows for voluminous interior and exterior spaces in a head-turning package.

Of the series, Cor says the team focused on safety, style, relaxation areas and the maximization of space. “Many clients come to Horizon for a mid-size yacht and want to enjoy their yacht with family and friends,” he says. “Entertaining is an important factor in their layout choices, as is the ability for the owners to easily manage the yacht themselves.”

Lu adds, “Collaborating with a designer as talented as Cor D. Rover has brought yet another unique style to our expansive range of motor yachts for passionate owners.” 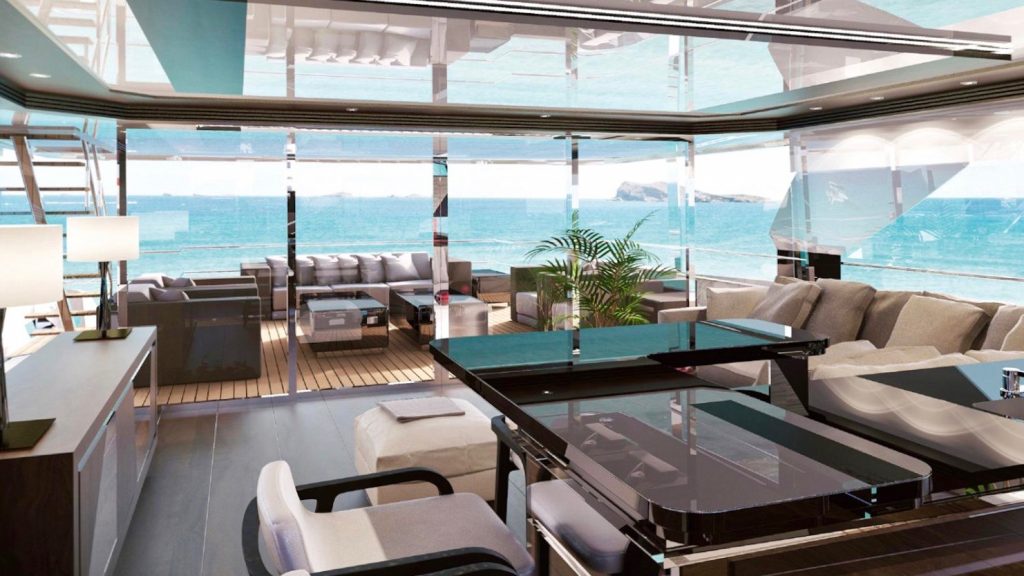 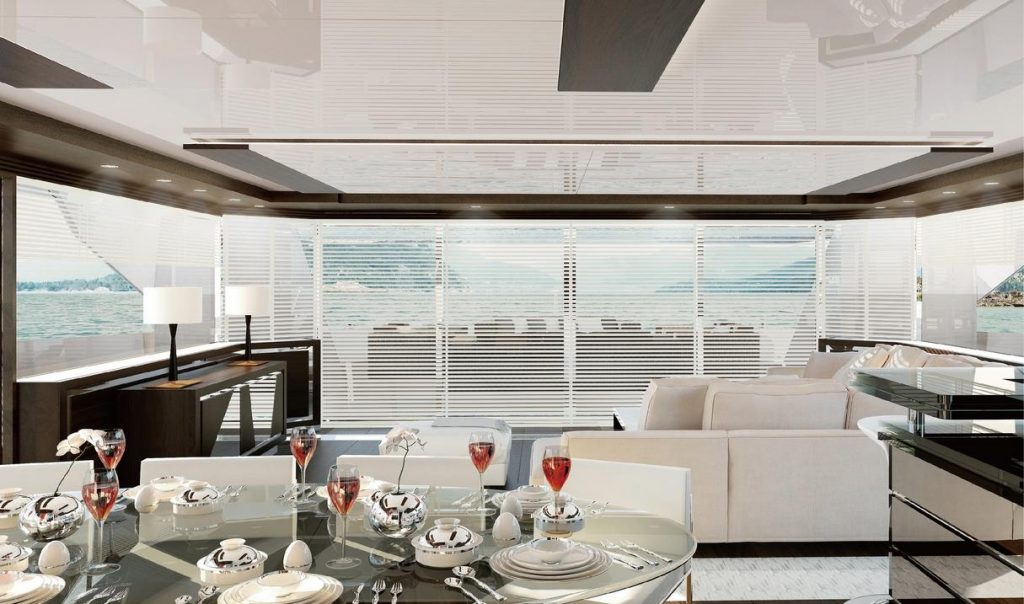 At 74 feet, the FD74 boasts extensive interior volume that encompasses four guest staterooms including an on-deck master. Designed to maximize the relationship between interior and exterior, the FD74 features a 21’ 6” beam and large windows throughout, which not only augment her stunning profile but also invite copious amounts of natural light.

A versatile and spacious aft deck leads into the main salon and country kitchen forward with a raised pilothouse just above. On the flybridge, the FD74 offers a large bar with stools and wraparound settee just aft of the helmstation. Designed for easy owner operation, the FD74 also includes crew quarters for two forward. She is powered by twin CAT C18A engines of 1136HP each or optional MAN V8s of 1200HP each. 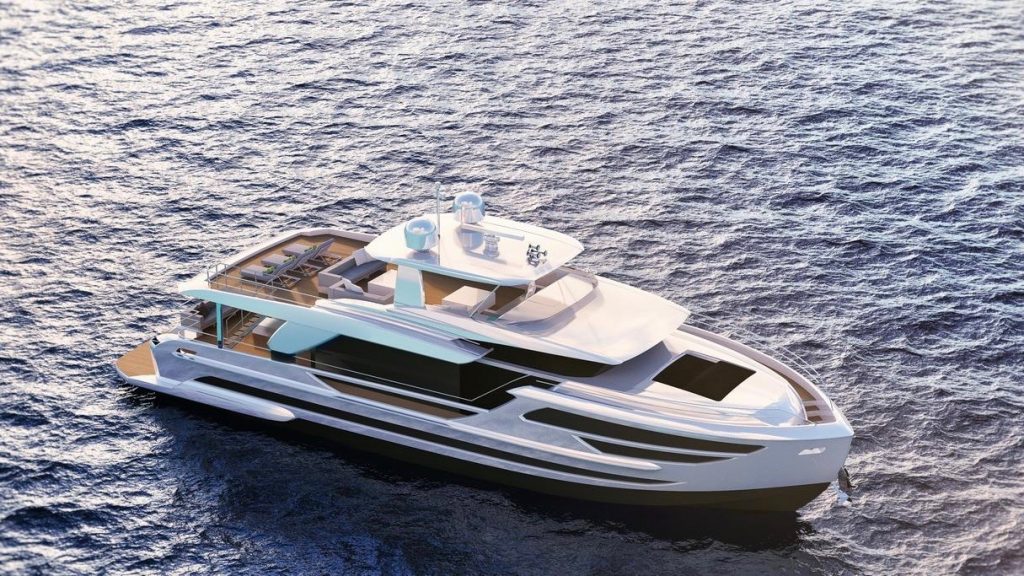 The exciting FD85’s hull design provides superior performance as well as a five-stateroom layout. A full-beam king master stateroom is situated on the main deck while mirrored VIP queen and twin guest staterooms are located on the lower deck. Sections of floor-to-ceiling glass windows in the main salon, formal dining room and master stateroom invite plenty of natural light into the interior.

On the flybridge, the FD85 offers an outdoor helm, full bar, twin dinettes, and a hot tub. Hull three is equipped with twin CAT C18 1600HP engines to achieve versatile and efficient cruising speeds between 10 and 20 knots. 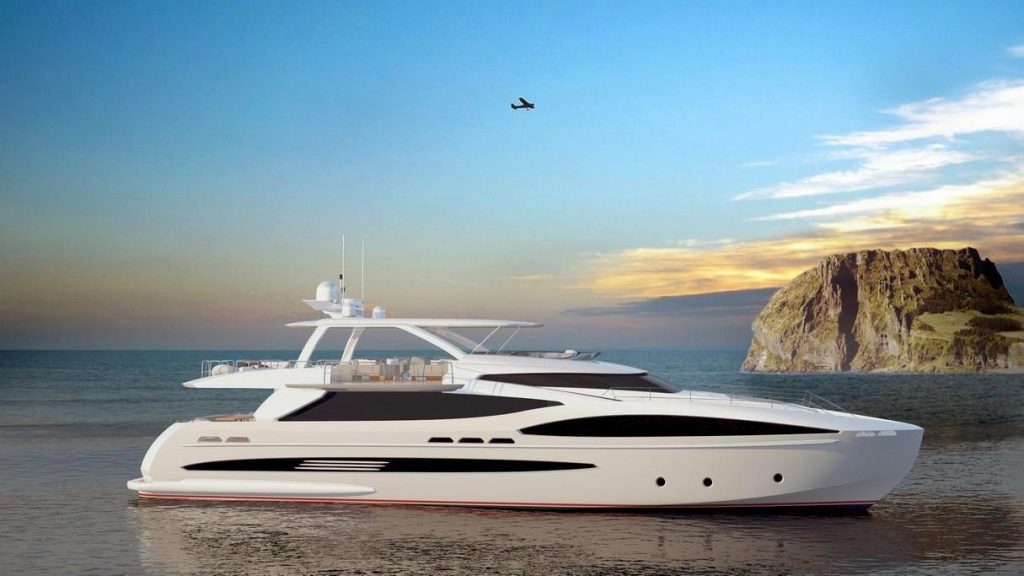 The largest of the FD series, the FD102 embodies style and performance with a sleek exterior profile that hints at the efficient hull design that characterizes this series. Boasting an overall length of 104 feet, the FD102 features an open bridge punctuated by fold-down balconies that extend the expansive al fresco living space.

Fitted with innovative amenities and options throughout, the FD102 offers five staterooms including a full-beam master on the main deck. Three crew cabins are situated on the lower deck. As with the other models in the FD series, the FD102 features large windows in the spacious main salon and formal dining area and plenty of opportunities for customization. The FD102 is powered by twin CAT C32 ACERTs of 1900HP each. 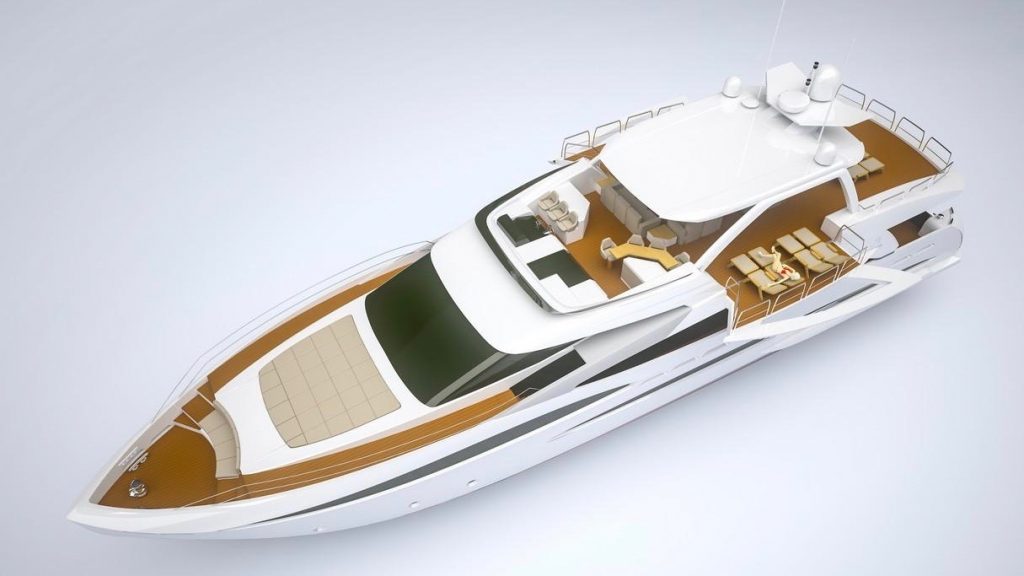 The new FD series exemplifies Horizon’s continuous pursuit of excellence and innovation in the luxury yacht market. Stay tuned in to our website and social media pages to follow the progress of the new FD74, FD102 and hull three of the FD85! 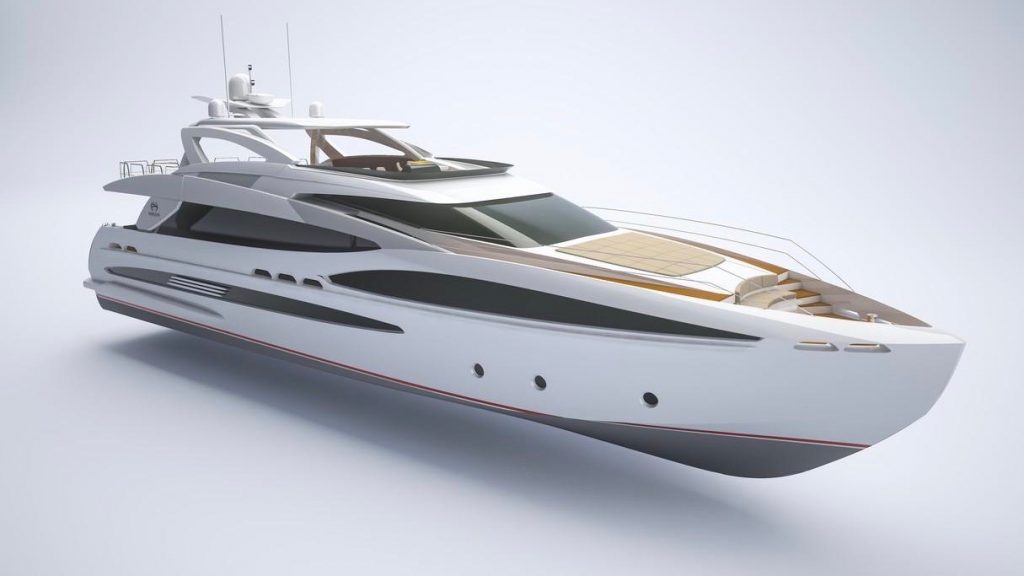