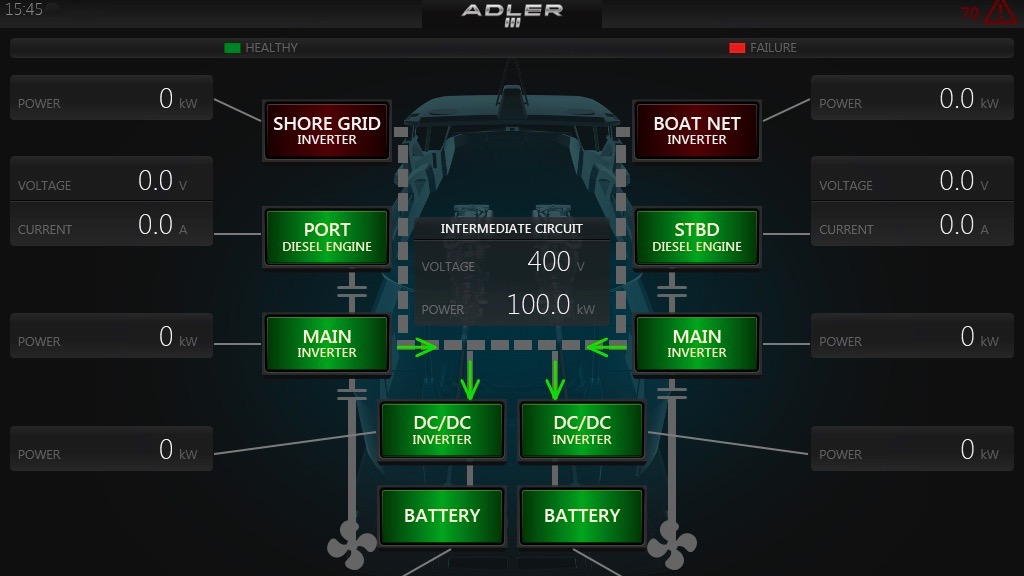 Adler Yacht, headquartered in Switzerland with construction facilities in Italy, is now revealing full details on its ground-breaking propulsion and technology systems, which give a deeper look into the yacht’s foundations and explain why the company’s new take on yacht building is so revolutionary.

The Adler Suprema is the smart yacht for the next generation of owners who don’t know the meaning of the word “compromise”. As well as pedigree interior and exterior design from Nuvolari-Lenard, one of the world’s most celebrated superyacht designers, the Adler Suprema offers pioneering propulsion and technology solutions that have broken multiple barriers in yachting.

The Suprema 76-foot (23.11-metre) motoryacht is the first in its kind to be built with a Hybrid Marine Solutions (HMS) hybrid propulsion system. The semi-displacement flybridge is also the first yacht in its category to be constructed from carbon fibre, and it is the first hybrid yacht in the world to have been built through the collaboration of expert teams in the automotive, aviation and marine sectors. 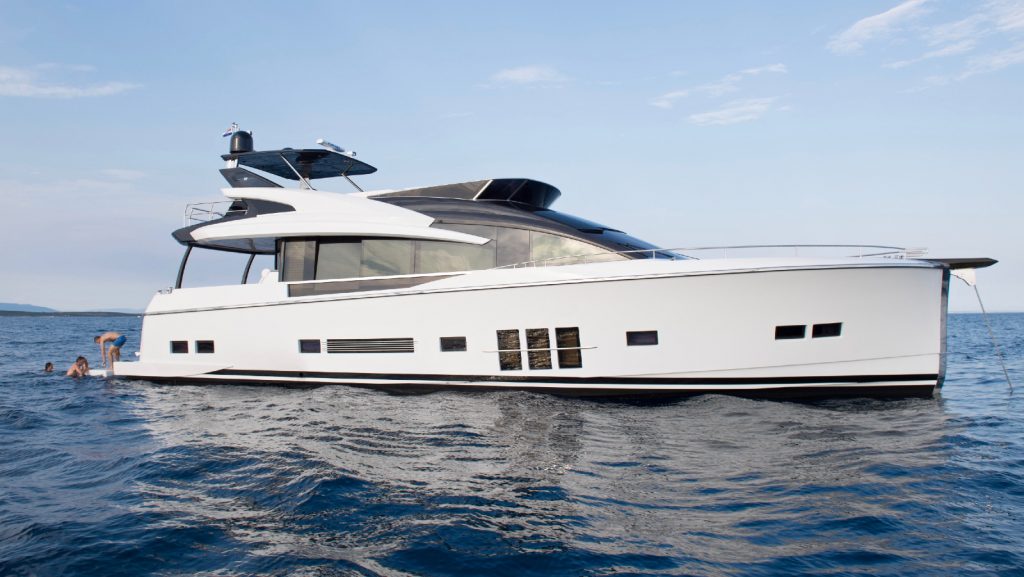 Adler’s background in the aviation industry has rooted its core principles in reliability, redundancy and safety, as well as provided an appreciation for the importance of aerodynamic efficiency. The naval architecture of the Adler Suprema’s RINA CE-A certified hull form was developed over four years, with vigorous finite element analysis optimization involving computational fluid dynamics simulations, followed extensive tank testing in Vienna.

The result is a yacht that provides the best possible combination of performance and seaworthiness, with a degree of investment in research and development that is practically unheard of in its category.

The HMS system consists of twin Caterpillar C18 1,150hp diesel engines, two ATE 100kW e-Units and a 170kW LiPo battery. The e-Units are used to control the system’s operations and transitions between propulsion modes. They comprise a combustion engine coupled to an electro-motor/generator combination. 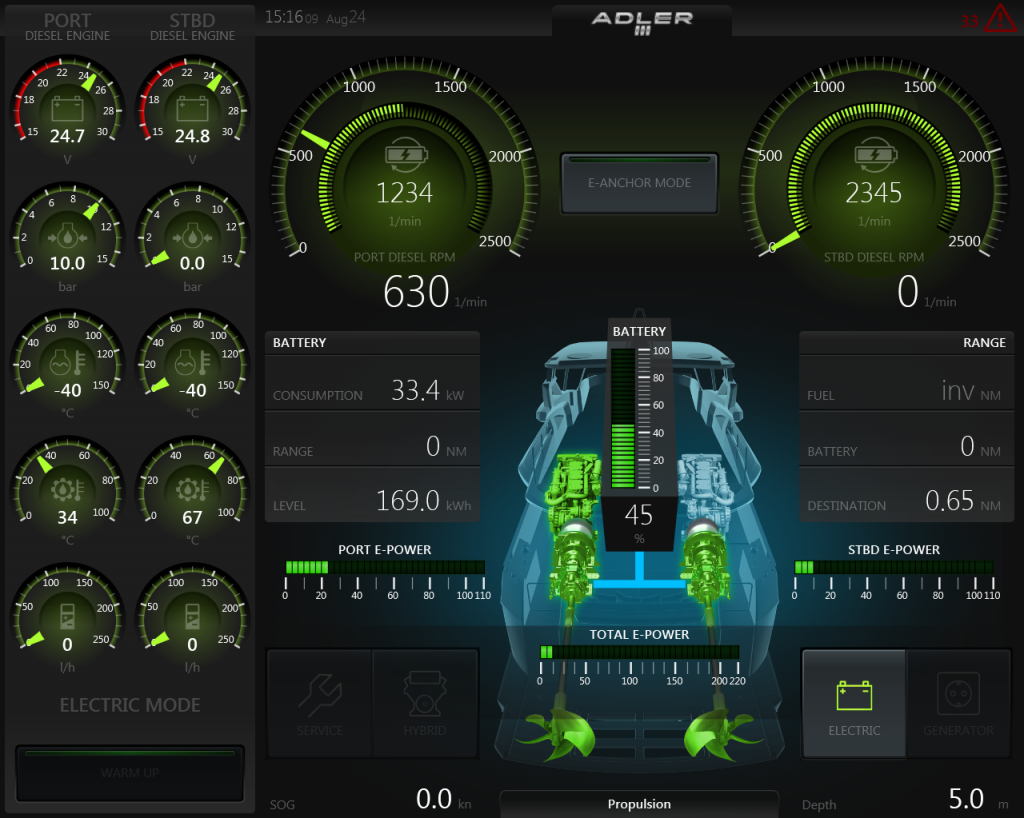 Test results show that the yacht can offer fuel savings of up to 30-50% compared to standard diesel propulsion systems. At eight knots, the Suprema consumes just 12 litres of fuel per hour. Taking the speed up to 14 knots with hybrid propulsion, this figure is just above 100 litres an hour. 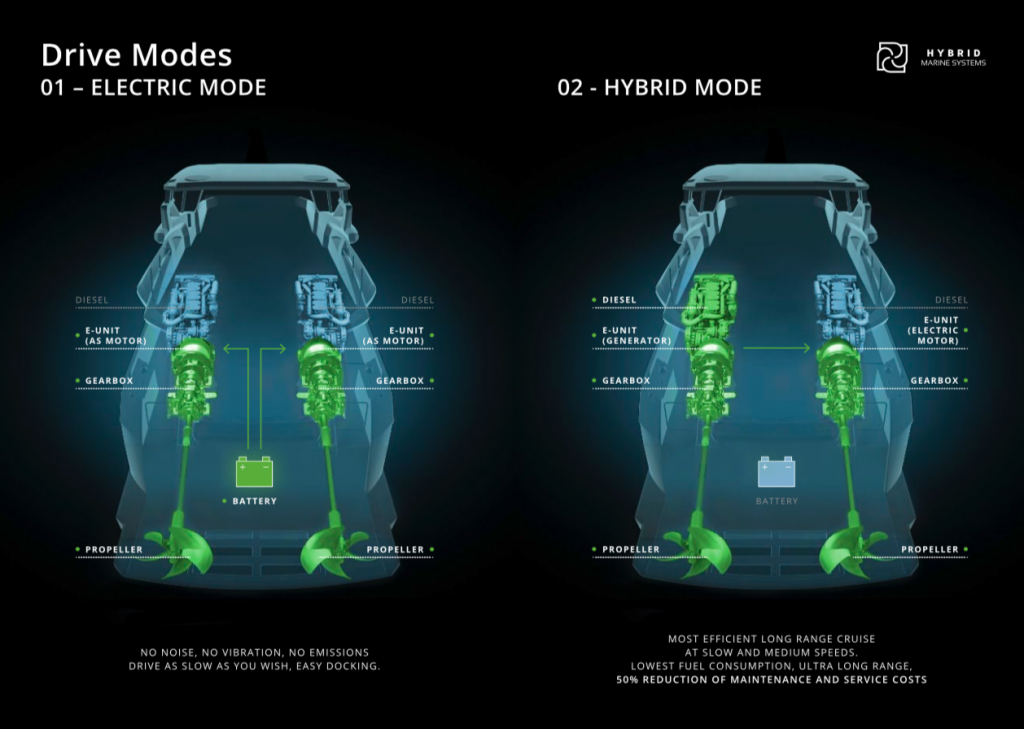 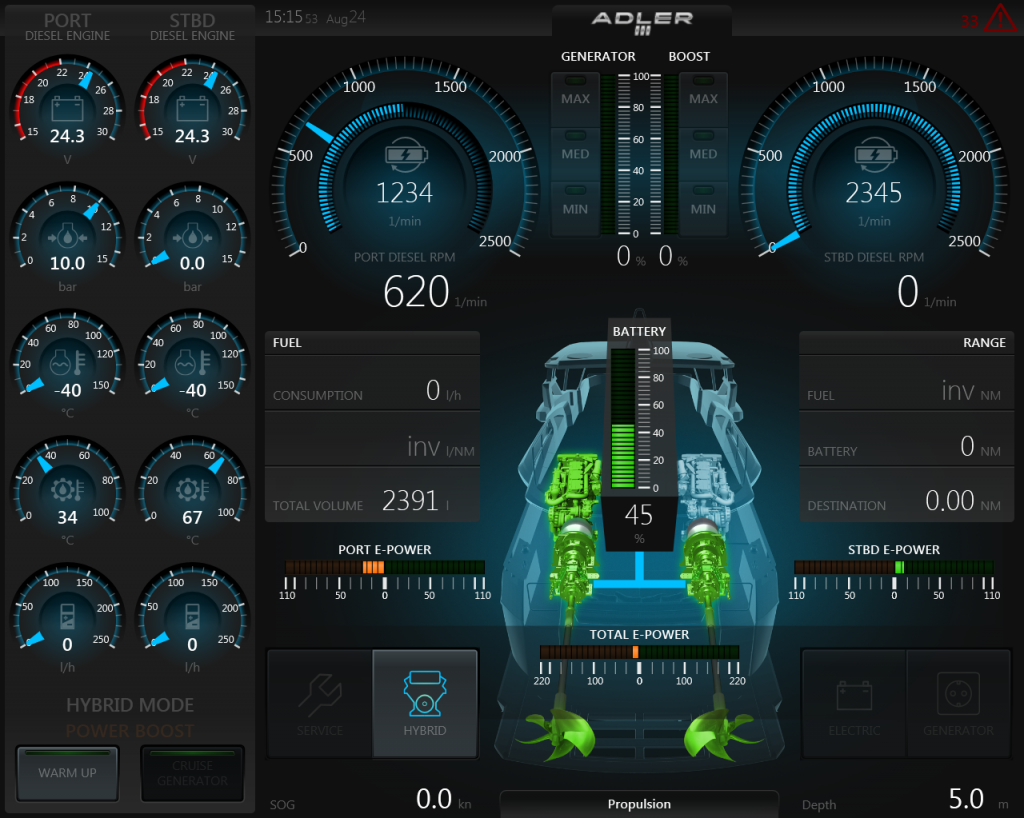 Whether owners are seeking silent and sedate propulsion or a fast passage to port, the yacht delivers. The Suprema can reach speeds of up to 11 knots powered silently by the electric motors alone, while the top speed achievable under normal diesel propulsion is 30 knots. 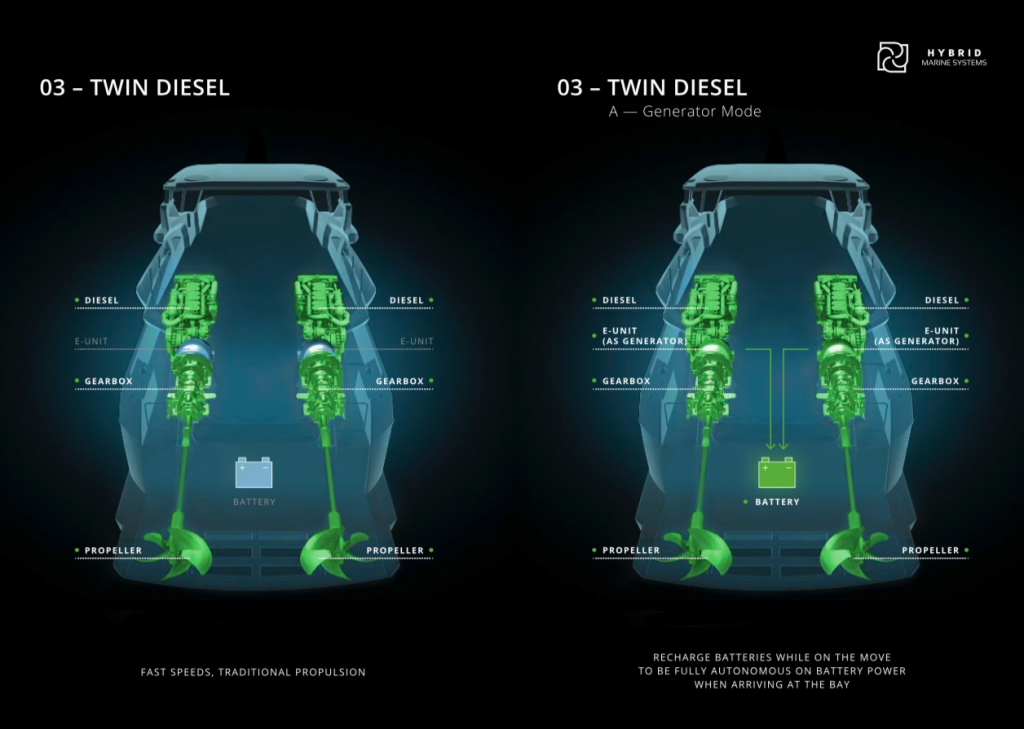 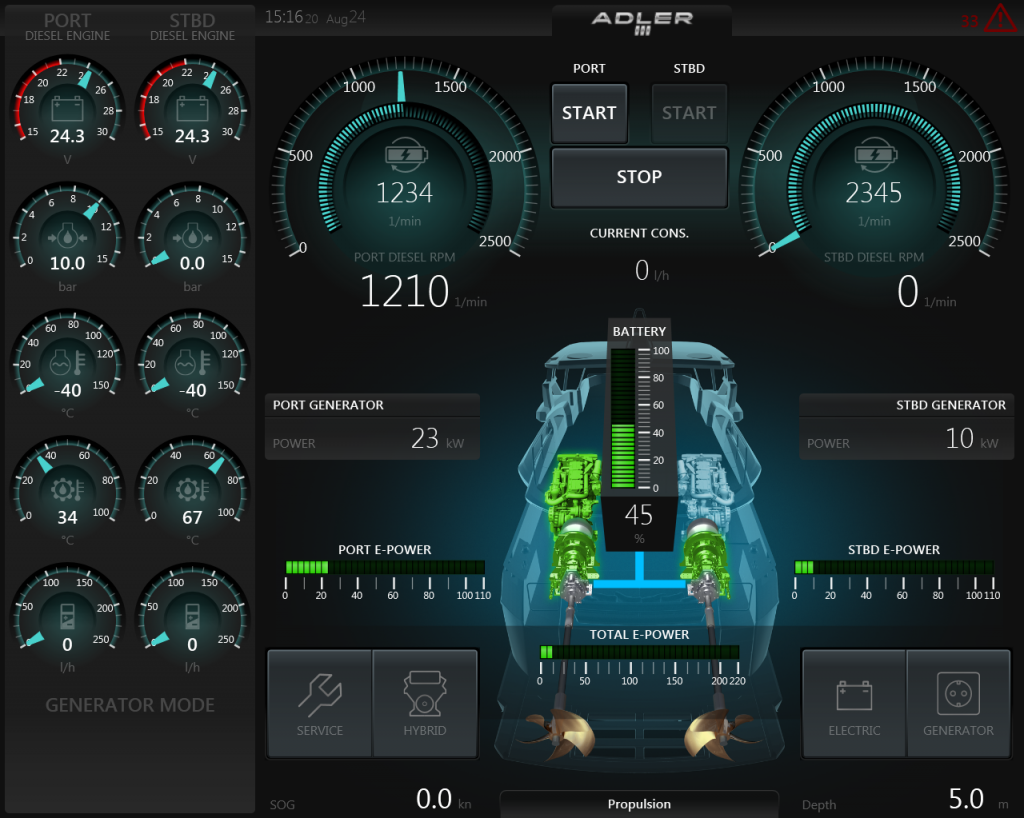 The Suprema’s potential cruising range is equally impressive. With a top range of up to 3,400nm at eight knots, owners could comfortably carry out a transatlantic crossing on a single tank of fuel. 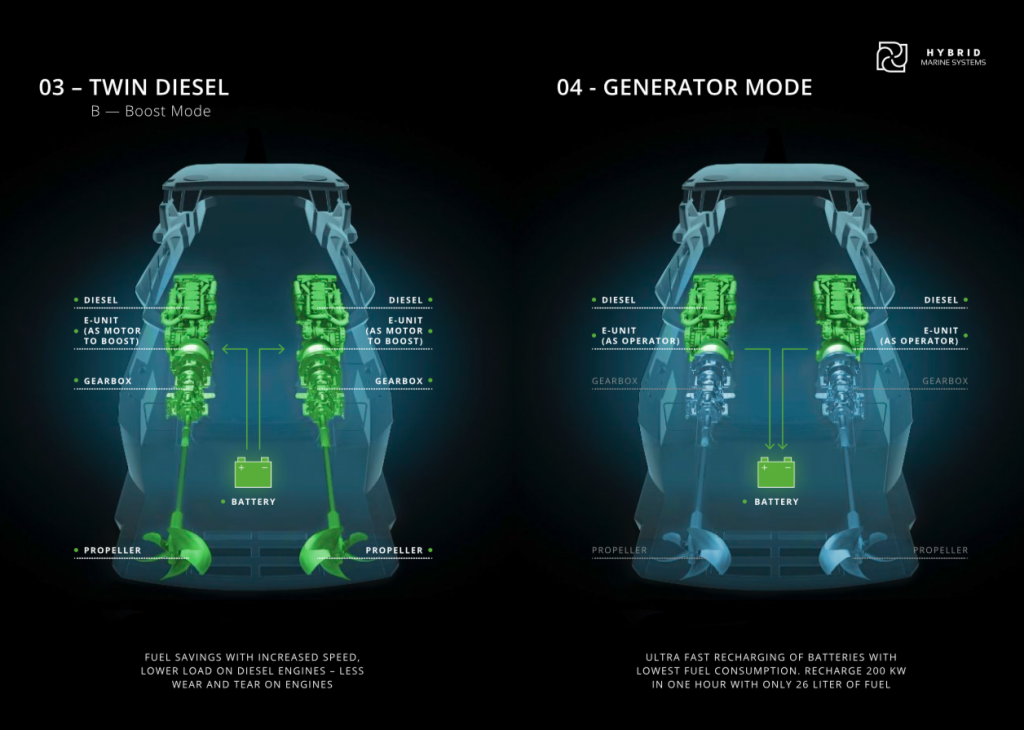 For those who enjoy the peaceful sounds of nature afloat, the LiPo battery can provide a full day’s onboard amenities on a single charge without the need to turn on diesel engines or a generator, and experiencing the noise, fumes and vibration that this provides.

“The ATE e-Units are custom-designed, high-efficiency asynchronised electric units that can work either as a motor or as a generator. They are installed on the shaft between the Caterpillar engines and the gearbox, separated by clutches. Thus, we can use the e-Units as very powerful generators for super fast charging while the propellers are not rotating. It takes less than an hour to fully recharge the hybrid batteries – at only about 23 liters of diesel,” says Philipp Pototschnik, CEO of Adler International.

“The design also allows the Caterpillar engines to work in twin diesel mode with the e-Units shut off, without loss of efficiency. What we are particularly proud of is that with this system, we can seamless switch between the propulsion sources: electric, twin diesel or hybrid.- even under full acceleration”. 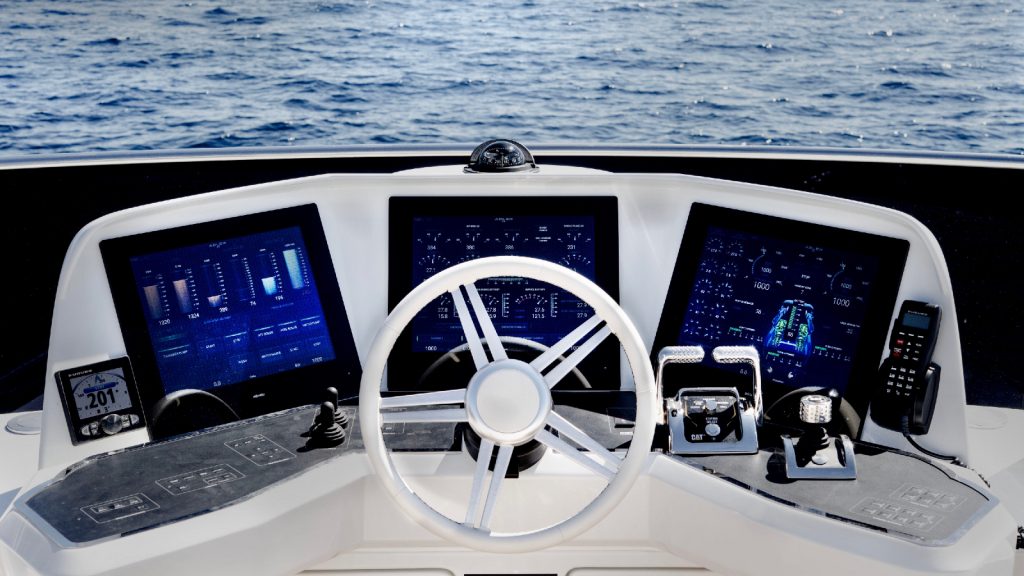 The default propulsion mode of the yacht controls fully automatic whether it uses electric, hybrid or twin diesel propulsion. At the highest speeds available on the Adler, a power boost mode automatically kicks in, drawing on power from all available systems, to maximize the top speed by a further 1.5 knots.

Should the need arise, the captain may also manually select the eco boost mode to reduce fuel consumption by adding electric power to propulsion, or the generator mode, which commands the e-Unit to load the lithium battery while traveling at three optimum charging speeds maintenance and running hours of the engines are reduced due to our smart Hybrid Marine System. In hybrid mode we alternately run only one engine, in electric there is none. The system is perfect for long slow cruises such as channels or island hopping, but can also go fast.

As the yacht is accelerated, it will automatically shift where it is drawing its power from, transitioning “through” the different power sources, without any need for manual selection from the captain. There is zero interruption in acceleration and the transition cannot be felt by the captain or passengers, with the only indication being the monitor’s display of power source.

The technology of tomorrow’s superyachts
As well as superior performance on the water, the Adler Suprema delivers state-of-the-art technology that is usually reserved for much larger luxury yachts. A lot of innovations have made the creation of this truly superlative yacht possible, with a high degree of automation and integration of the onboard technology.

From a practical perspective and to give peace of mind, the Adler Suprema is fitted with remote control of all operational systems, from the entertainment to bilge pumps, so owners and captains can feel at ease even when they are not on board. There are nine cameras fitted across the yacht, including a FLIR night vision system, which assist with manoeuvring as well as monitoring. 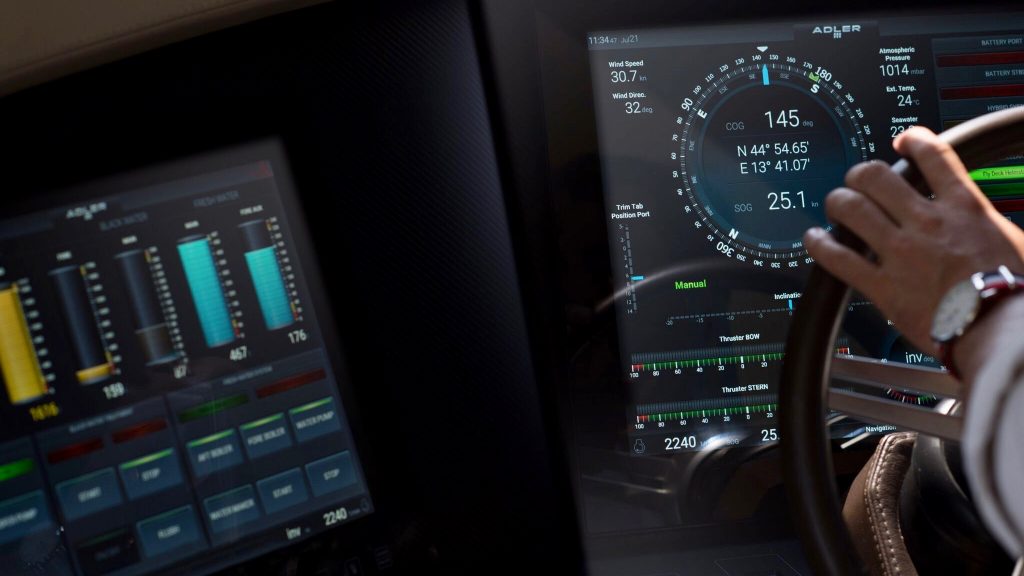 As well as bow and stern thrusters, joystick controls and a dynamic positioning system mean that even the toughest of manoeuvres can be carried out easily. For those who are particularly security conscious, a high-tech keyless system has been integrated for door access as well as helm controls, using cutting-edge fingerprint technology.

Of course, yachting should also be about enjoyment. Adler’s team, alongside Nuvolari-Lenard, designed a number of creature comforts into the Suprema’s specification, to ensure that guests receive an experience they would expect of a superyacht, but fitted into a smaller package.

Under-floor heating has been fitted in the main salon and cabin heads, while cup coolers integrated into the cockpit’s armrests provide an unexpected luxury touch. On the exterior, the stern’s swimming platform can be lowered into the water and the foredeck features a Jacuzzi. Private glass technology has been used to give a little extra privacy to the interior while in port, and the main salon has a 92-inch rolling AV screen integrated into the ceiling. 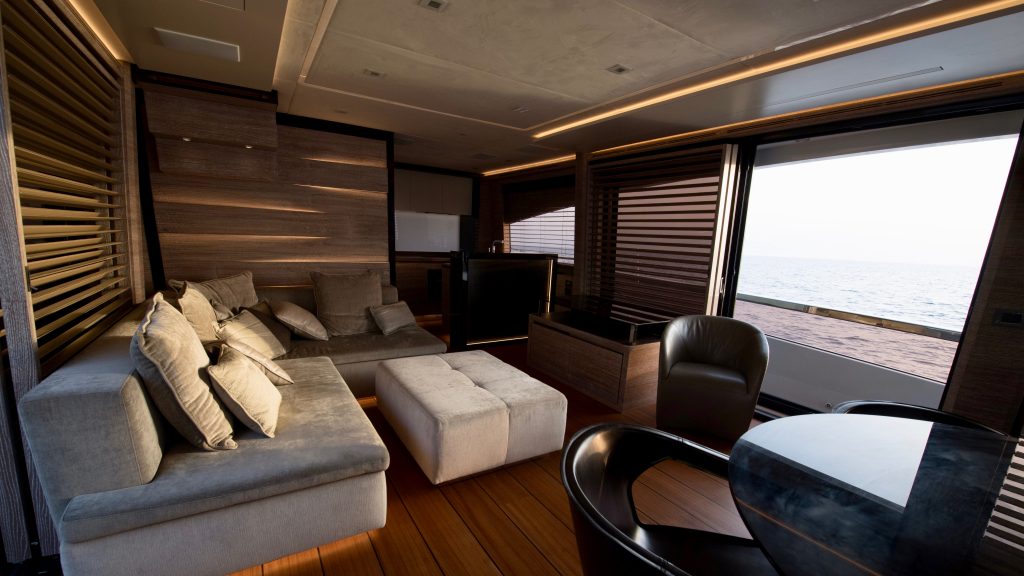 While it’s clear that the Adler Suprema has chosen to define its standards not by those other vessels in its size range, but by tirelessly searching for the very best solution, some of the most interesting surprises come from its technical progress rather than its luxurious touches.

“We are very proud of what we have achieved in the Adler Suprema,” adds Pototschnik. “This is a yachtsman’s vessel, and we have done our utmost to exceed expectations wherever possible, drawing on expertise from outside of yachting to really take things to the next level. It sets the standard where others will no doubt follow.”

For further information regarding the Adler Suprema, please contact Standen Marine on +61 2 8880 4088 or by email using marine@standengroup.com.au